Tourists and the Steel Dragon 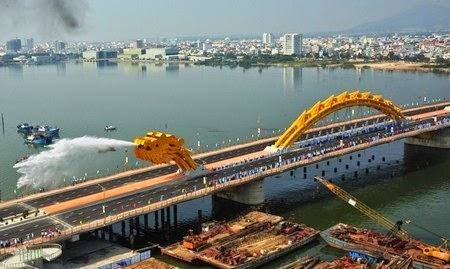 Officials in Vietnam wanted to build a bridge that would endure weather, time, and tourists to become a cultural icon. The River Hán runs through Da Nang, a port city near the beach. With an airport on one side of the river and beaches on the other, tourists are continually crossing the river. Even with five bridges already spanning the river, the city realized it would need another. Two of the old bridges were taken down so the city could focus its resources on the new bridge instead of repairing the old ones.

The company the city hired to build the new bridge designed it to look like a dragon. With six lanes and two sidewalks for pedestrians, the bridge provides the shortest route between the airport and the beach. Platforms at each end allow space for tourists to rest, picnic, and view the bridge. People crowd to see the impressive structure at night, when 2,500 color changing LED lights light up the dragon’s spine and the massive head breathes out real flames. While the flames are usually reserved for weekend nights, during most days the dragon remains active by spewing water.

The dragon has special significance for the Vietnamese people since it features heavily in their mythology. In one story the dragon is an ancestor of the people, particularly the emperor, while in another the dragon brings the rain, prosperity, and power. The steel bridge is shaped to resemble the ancient mythological figure and remind visitors of Vietnam’s lavish cultural history. After the bridge was completed, the city of Da Nang applied to the Guinness Book of World Records to have the bridge recognized as the largest steel dragon in the world.

The bridge inspired the world and won multiple international awards for lighting, engineering, and design. The bridge is the first lighting design from Vietnam to win awards like this. Instead of merely being functional, the bridge’s sculptural shape achieves a lasting aesthetic. The dragon’s elongated body arches above the bridge before diving beneath the six lane highway to anchor the structure firmly to the pilings underneath.

The design wouldn’t have been possible without the versatility of its steel pieces. From the slender teeth to the piping of the backbone, the bridge’s sculptural design will endure both weather and tourists for years to come. The bridge not only connects tourists to the beach, but also connects engineering with art, practicality with fun, and function with aesthetic.